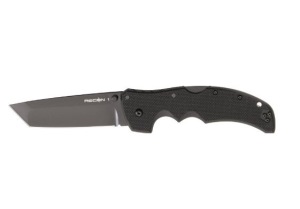 Cold Steel is a well established brand in the knife industry. Cold Steel items are typically known for their durability and overall quality, and the Recon Series of knives is definitely no exception. This series of blades features a full range of lengths and thicknesses, as well as varying overall knife lengths. Blade styles are also offered in an impressible options range, including serrated, spear point, tanto point, and clip point options. All knives in the Cold Steel Recon Series (except for the Micro Recon) feature an ambidextrous pocket/belt clip, allowing for optimal ease in carrying these knives at any and all times. The Cold Steel Micro Recon knife’s clip is replaced with a simple small key ring. The price of each item in this series varies quite a bit, depending on the specifications of each Cold Steel Recon knife.

The basics of this knife series can be divided into four different categories: Micro Recon 1, Mini Recon 1, Recon 1, and XL Recon 1. As indicated by their names, each of these knife options is different from the next due to its size. Blade length increases from two inches to five and half, and overall knife length ranges from around four and a half inches to over twelve. Blade thickness and weight also increase. Additionally, as mentioned previously, each of these four basic Recon models can be purchased with varying blade styles; while the most blade style options are currently available for the basic Cold Steel Recon 1, at least two options exist for all other Recon Series models.

However, regardless of the specifics of any chosen knife in this series, one thing remains beautifully standard across all of the models. Every blade is made from imported Japanese AUS 8A stainless steel. Every handle is comfortably laminated and features a contoured grip that gives you both comfort and stability as you hold the knife. Swift and strong mechanical fasteners spring the blade out when you want it out and hold it in when you want it in. Finally, every Cold Steel Recon Series knife is also outfitted with an incredibly reliable Tri-Ad lock; this system makes it extremely unlikely that you’ll ever have to worry about your blade unlocking without you wanting it to.

As a whole, customer reviews for this knife series are extremely positive. This fact rings true for reviews posted both on the official Cold Steel company website and on third-party websites like that of Amazon.com. Common sentiment seems to be that the Recon knives are all that they are promised to be and more. Durability and reliability have been combined to create a formidable tool that works just as effectively at slicing through tough materials as it does as a handy self protection weapon. Metals are no match for these sturdy blades. The anti-lock system is just as smooth and effective as promised, and the system leaves users with little to worry about in terms of performance reliability.

Personally, I am most pleased with both the quality of these knives and the variability offered within the series. While the Recon Micro 1 may be great for someone looking for an extremely handy and small pocket knife, the standard Recon 1 will probably have a larger fan base. Even though the smaller models of this knife definitely are appealing because of their portability, sometimes having a larger blade is simply necessary to get a job done in a shorter period of time. Still, it is nice to know that if I ever need a smaller version of an extremely reliable knife, there are at least several different ones in this exact same series to choose from. Additionally, the clip on these knives is really as ambidextrous as claimed; as a lefty, I’ve never had any problems with using mine.